My first trip to Hanoi 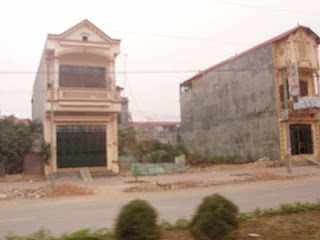 It came as a shock to me as to how backward Hanoi is? Anyway I was on an official trip to access the viability of a project here so who am I to complain. My flight landed at the Hanoi Airport and we had our Korean friends to pick up from the Airport and we went straight to the site which was about 30 minutes drive or more from the Airport. We were at the Korean Contractors office and after a short meeting left for the actual site, it was 19 bridges and foundation works for 4 bridges had started. We looked at the contractors who were doing their work. And by the time we finished the work it was pretty late in the evening but the watch showed otherwise, my watch was still set at Malaysian time and it is about 1 hour difference in Hanoi. So it wasn’t that late and work finished at 5.30 p.m. but it was pretty dark outside due to winter.

Our partner brought us to the Hotel that we were suppose to stay and boy, was I disappointed. Maybe it is partly due to the location, we are at the outskirts I believe and the Hotel was really run down. Dinner was something and I really couldn’t eat any stuff except the rice with a little fish, oh how I miss home food, I never felt like this in Hyderabad though.

The first room I had, there wasn’t any light in the bathroom and when I informed the Hotel management, they spent about 10 minutes trying to get the light fixed and finally gave up. So I had to change my room from the 3rd floor to the 2nd floor. I had asked the girl who was in charge to bring me an adaptor for my phone and laptop power cord which is 3 pin to the 2 pin and to my surprise, she brought another telephone charger and I tried explaining in English to her that I don’t need my phone to be charged in English, but I guess she didn’t understood a single word and she took my phone and got it charged. Bless her but I guess if you can’t communicate, this is what happens.

The climate in Hanoi is pretty cold, and I am freezing in my room as we are not prepared for the winter season. Anyway lucky me, I brought my jacket and it is saving me now from the fiery cold night. Thank God for the little mercies as I have managed to switch my laptop from Acer to the power saving mode so that I can write this blog and I have 6 hrs 36 minutes left and after this I can read my eBooks. I will try to post this when I get back, in fact I had written 2 blogs, one on last Saturday but didn’t have the time to post it and in that I had written about my New Year resolution.

The other funny thing happened to me in the morning at the hotel after they had served me my breakfast of chicken rice noodles, I was very thirsty and I asked the bell boy for some water, I had to show him the motion of drinking water as he doesn’t understand a word of English and to my surprise, he uttered an English word...”Vodka”...I guess Vodka must be very popular in Vietnam...but having it at breakfast.....

Having said all of the above, I believe getting away from home and being in another alien country is a good experience and it makes me miss on stuff that I had taken for granted.

Anonymous said...
This comment has been removed by a blog administrator.
February 1, 2010 at 1:48 AM

Anonymous said...
This comment has been removed by a blog administrator.
February 1, 2010 at 1:49 AM

Anonymous said...
This comment has been removed by a blog administrator.
February 1, 2010 at 1:50 AM

Good dispatch and this post helped me alot in my college assignement. Gratefulness you for your information.

Well anonymous...glad I am of help to you...

This post gave me a strange image of the place. Very sad....

Out of curiousity.... chicken for breakfast? Is this typical? My sister-in-law is Philippine and she makes deserts with chicken in it (something we found slightly odd), but it taste good.

And they thought you meant Vodka to drink instead of water. Wow. That's a statement!

Aleta..nice to see you at my blog...yes it was chicken rice noodles...pieces of shredded chicken, usually steamed. But I guess Vodka in the morning is rather early...but I noticed that Vodka is one of their favourite drinks and it must be cheap as my hosts the Koreans drank it and they offered to us during dinner. I had tasted it but didn't like it besides I stopped drinking after my open heart except wine. I guess the food habits around Asia is the same, even in Malaysia we get almost similar food as Vietnam, Philippines is no acception.

Opulently I assent to but I think the collection should have more info then it has.

ok that's fine, i just added even more some other new emo backgrounds on my blog
http://www.emo-backgrounds.info

I'm spending my time here for the children of Haiti.

I'm at this site for a non-profit haiti group that is devoted to giving time to
creating an oppurunity for the children in haiti. If anyone wants to give money then do so here:

They provide kids in Haiti books and teach them.

And yes, they're legit.

It would be awesome if you could help us

Nice post, thanks for sharing this wonderful and useful information with us.

That was a revealing experience. And unintentionally funny as well. Glad to know that you survived the heat and the mishaps unscathed.