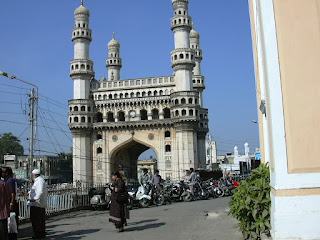 I guess being in Hyderabad and not displaying it's iconic image would be a sin. I know it is an old structure, that's why upto now I haven't taken the stairs up to the gallery (don't get me wrong). Anyway it is located in the old city and the place is like a huge market with I guess from bangles to pearls are being sold dirt cheap and maybe a lot more of other stuffs too. I have been here only a couple of times and that also to show my friends what "Charminar" looks like and below is an extract of what Charminar is from the net, however the photo was taken by me:

Hyderabad's most popular landmark Charminar is located at the center of the old city and surround by lively bazaars. It was built by Sultan Mohammed Quli Qutb Shah in 1591 in honour of his wife Bhagmati, shortly after he had shifted his capital from Golconda to what now is known as Hyderabad. It is popular as the Arc de Triomphe of the East and considered as the legendary masterpiece of Qutub Shahi's.

Charming structure define as its name from four intricately carved minarets, the four graceful minarets which means 'Four Minars'. Charminar is in square shape with four towers in the four corners of the square, each side is 20 metres long. Every side opens into a plaza through giant arches, which overlook four major thoroughfares and dwarf other features of the building except the minarets. Each arch is 11 metres wide and rises 20 metres to the pinnacle from the plinth. The minarets soar skywards by 24 metres from the roof of Charminar. Each minaret has four storeys, each looking like a delicately carved ring around the minaret. From the ground to the apex, the minarets cover a length of 48.7 metres.

Charminar is surrounded by markets and many other structures which adds to its grace. It boasts Chow Mohalla palace, Shahali Banda, Laad Bazar, Kali Kaman and Patthar Gatti and Mecca Masjid. The structure of Charminar show both Indian and Mughal architectural styles. You can see good views of all over the old city from the top of the minarets.

I first came across the Charminar on the cover of CHARMINAR cigarette packets which my dad and uncles sometimes smoked. But I really loved in when I saw it on my visit to Hyderabad, esp. the crowd and bustle of the bangle-sellers who sell their wares at the foot of the pillars.

even I and the spouse were sad when Holland lost, esp becoz they had played so well in the earlier round.

haha...I remebered Charminar when I was doing my engineering in REC Waranagal by the Charms cigarettes, first the yellow packets then the denim packets because at that time I hadn't visited Charminar until 2003, hahaha.

Without England I had lost interest in EURO2008, and now Holland. The other team that I like was Germany.

Thanks for dropping by.

I visited Hyderabad for the 1st time in Sept, 2007 just aroundthe time when that Punjagutta flyover gave way. I loved the Golconda Fort & many other places that we visited there but was a little disappointed with the Charminar. Somehow, didn't expect the hustle & bustle of the market place.

piscean angel...I bet the crowd turns you off right...that's why I don't frequent that place unless someone new comes around and I have to show Charminar to them. The traffic jam into and out of the place is terrible.