Want to join the force? 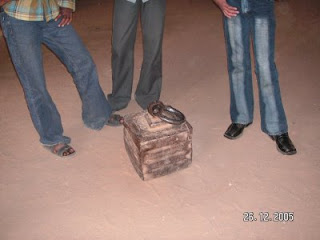 Look at the ancient dumb bell and it looks pretty heavy right? I tried lifting it and it didn't budge an inch. This is what you see in Golconda Fort in Hyderabad which was built in the 13th century by the Kakatiya Kings and the existing structure was built by Qutub Shahi Kings into a massive fort with granite walls having eight gates and 87 bastions spread upto 7 kms, in circumference over a span of 62 years. Golconda Fort, popularly known in Telugu as "Golla Konda", which means "Shepherd's Hill", has an exotic story behind it.

What I was impressed with was when the guide told me regarding the criteria those days in joining the guards or sentry, you have to lift the dumb bells and I hope you don't have to run with it too (they would die of hernia). If only they had this same kind of qualifying exercise now I guess the Hyderabad police force would really be a super fit crime fighting force to reckon with and not with their pot belly and scary looking moustaches. You don't need guns and all you have to do is stare at the criminals and they would surrender or crumble in fear. God only knows what sort of diet they had to be on (just a thought). Below is a section of the fort taken from one of the Towers. 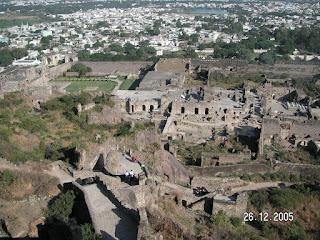 There is something about forts that I really like..Im yet to go to Golconda fort..thanks for this interesting piece of info
Lakshmi

Welcome to my blogs and thank you for your comments. Hope to see you often and I might just add you on my blog roll but blog would it be as you have many.

A lovely blog. I shall return for a leisurely read.:)

Thank you indicaspecies....hope to see you often