Snake in my kitchen 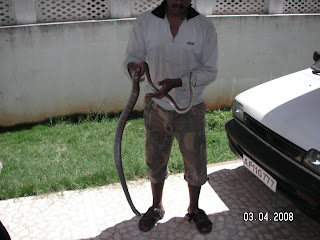 It all started when my driver informed me that he saw a snake in the garden and he told me that it was a huge king cobra. So I informed my neighbour and she called up "friends of the snake society", they came over and checked my garden and there was no sign of the snake and they left after that.
Meanwhile I told my servant to close the back door in the kitchen and after that I made my tea and jokingly told my servant to clean up the area where I kept the plastic bags which I normally save from the supermarket trips so that I can use it as my garbage plastic bags. When I was in the study room, suddenly I heard her screaming and I knew that she must have seen a snake or the worst case was that she would have been bitten by one. She came running out of the kitchen and I told her to close the kitchen door connecting to my living room immediately and I can see her shivering. Then I asked my neighbour to call the snake catchers, they came back after 10 minutes and they caught the slimmy creature, it was a rat snake and not a giant size cobra as my driver had informed me. Thank God!

I took the photo of the snake with the snake catcher and you can see that it was quite a long snake (maybe 5 to 6 feet) and when I spoke to him, he informed me that there are quite a few cobras and vipers here in the area where I stay (kinda scary huh!). I paid for their services(friend's of snakes society) which was about USD 5 and they told me that they would release the snake about 200 km from here into the wilderness, I hope it doesn't have a homing device and decides to come back to my kitchen for revenge. By the way, the rat snake is a non-venomous variety(to me a snake is a snake) but I believe it does bite.
©sukku

The article was posted on my Opera blog on 03.04.2008 and I just wanted to
share this creepy experience with you.

That must have been a very scary experience! I dread snakes even in my dreams!

But I remember watching a documentary on south east asian countries and they showed how snakes crawling into houses is a common thing!

Shree thanks for dropping in. Yes I hate snakes not that they love me, but I am very careful now. I tell my servant to keep the doors closed.

I guess this snake was lost in a sense that due to urbanisation in India, these slimpy creatures have no place to be and these particular snake is a rat snake and it must have been hungry (it was looking for food in kitchen).

Have a good day and God bless you.