Do you believe in Guardian angels? 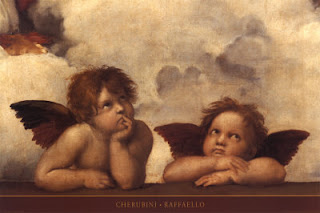 I was just pondering on the subject of guardian angels and do you believe in them? I can relate a bad accident that I had a couple of years back, I was working almost every night until mid-night as I was involved in the foundation and basement work of Hotel Mandarin Oriental which is adjacent to the Petronas Twin Towers. Our earthworks for the four level of basement involved the excavation of massive amount of earth which can only be carted out from 7.00 p.m. until 7.00 a.m. every day (I stayed back until 10.00 or 11.00 p.m.) and coordinating these works really took a lot from me physically as in the mornings I was in charge of the foundation works.

So I was pretty tired on the fateful Friday somewhere in 1997. I was driving a red 4wd Vitara Suzuki and after work which was about 10.30 p.m. I left my site. I was driving back on the Federal Highway and I was feeling rather unusually tired. I know I was exhausted but never have I felt like dozing off. And I was pretty close to my house and the next thing I could remember was a "bang" and a "thud" and I woke up from my sleep (closed my eyes for a few seconds), my car came to a stop after hitting the extended portion of a crane parked on a Federal Highway. I didn't know what was happening as it was all like a dream. I saw my car was smashed very badly, one side of the car was caved in, my steering broke into 2, my seat belt snapped and I couldn't believe my eye. I came out of the car, there was police siren, camera man, and lots of onlooker. As I was standing amongst the onlookers, some of them were suprised that I came out without a scratch. My chest was paining because of the impact of the accident and due to the seat belt which strained me from smashing my head against the windscreen (count my blessings).

Now when I think about the incident, I am sure that there was a guardian angel looking after me otherwise how could I have survived the accident as the car was smashed pretty badly and from what I heard from the mechanics, they had to change the chassis of the car due to the impact.

Just thought of sharing this with you and I wanted to know whether any of you had any similar incidents like this.
Posted by Sukku at 1:40 PM

Yes, ABSOLUTELY yes, I believe in Guardian angels! I believed in them before Greg's car accident and after his accident, it only confirms it more in my heart, if that is possible. I've never been in a bad car accident, but when I was a little girl I had a high fever. The fever was so high that my eyes were rolling in the back of my head and my skin was hot, the doctor told my Mom if she had waited 30 more minutes to get me to the hospital, I would be dead. I was too little to remember it, but I truly believe I had guardian angels watching me then and still to this day!

Just after I was born, I started passing blood and desperately needed a transfusion. It also happens that I have the rarest blood type in the world and my family went crazy trying to find a donor. They eventually did, and here I am, so yes absolutely I believe in guardian angels and God.

Aleta@ Thanks for sharing and I guess they are watching us from a distant and they zoom in when we are in distress...otherwise we cannot explain the why's and if's..

Shalom@Welcome to my blogs and I hope to see you often.
Thanks for sharing and I am sure the guardian angel is keeping an eye on you as you are someone special to them...

I always believe in guardian angel looking after us and have several moments I can think about, many times we have received what we needed or found help where none existed.

Renu@Thank you for sharing your experience. Have great weekend and Happy Diwali to you and all at home.

Without a doubt.....yes. Nope I've not had any experiences as such but I do realise it doesnt take a minute for something bad to happen if they r not around.

Yes it was but as you said..."Thank God nothing untoward happened"...after 4 years of this accident I had another, my Pajero skidded after I applied breaks and I went rolling about 4 times on a ravine..and lucky I didn't go deep into the gorge...another lucky escape...