Pictures from Mirrors in Hyderabad 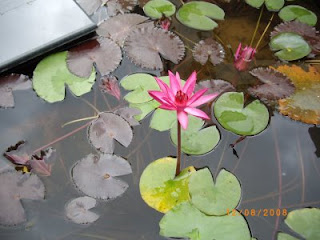 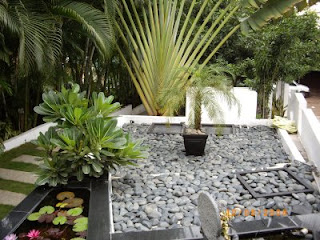 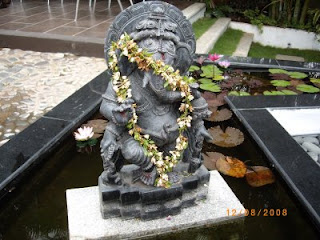 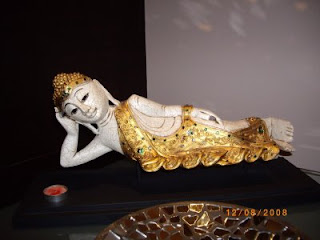 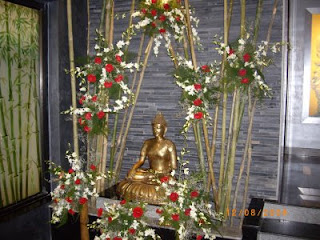 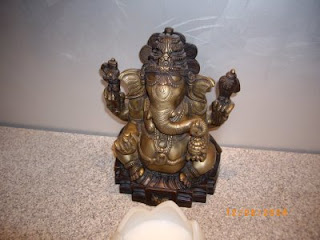 I hope you enjoy these photo's taken at Mirrors as I certainly did. I liked the small pool or pond if you like to call it with a water lily. Do let me know what you think.
Posted by Sukku at 6:59 PM 5 comments: 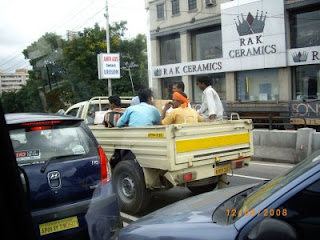 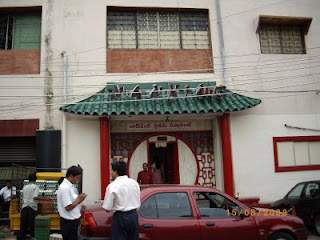 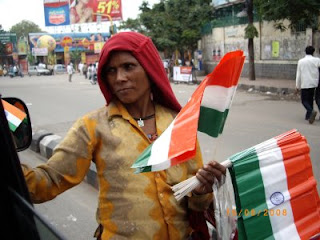 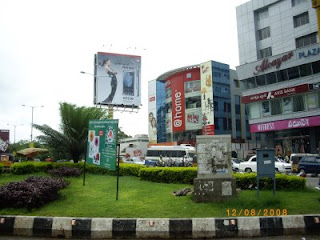 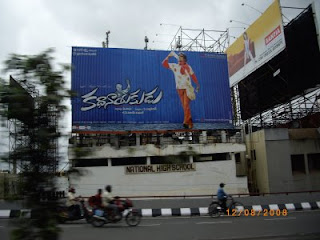 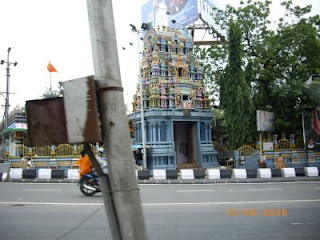 Those pictures sure do have a lot to say. I was stuck in a jam and I took the photo from my car and I was suprised to see that a mini pickup van was transporting workers (just like cattle). Just below that is a restaurant "Nanking" which I guess is a very old chinese restaurant in Hyderabad, maybe 30 years old or more. The furnitures in the restaurant certainly looks very old. Anyway I had the pleasure of having my lunch there and I find the food is okay, but the service was kinda slow (maybe the staff are as old as the restaurant).

There is also a picture of a beggar selling the Indian National flag at the traffic junction on India's Independence day. And then there is the huge billboard of the superstar himself "Rajni"and just above is a hindu temple next to the highway.
Posted by Sukku at 9:43 AM 2 comments:

I was watching the movie this morning, a little bit of it though on DVD and I liked this quote by Oogway (the wise turtle).

"Yesterday is history, tomorrow is a mystery, but today is a gift. That is why it is called the present".

I can't wait to finish the rest of the movie tonight.

Tell me what do you think of the movie?
Posted by Sukku at 5:10 PM No comments:

All work and no pay

Yes that is what is happening with my company now. Going through a rough patch and there seems to be a power struggle. I am with the new committee that is formed to get the company rolling. We are all rolling without pay. But lately after my trip from India, I am more busy than usual and it is nice in a way. Lets see where all this is going to take us.
Posted by Sukku at 4:57 PM No comments: 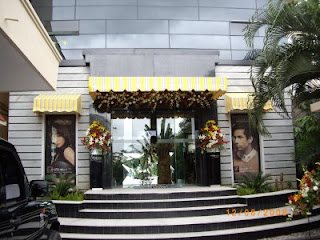 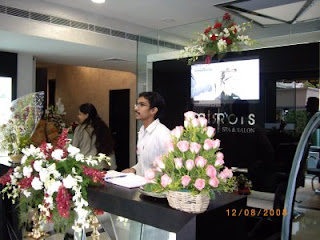 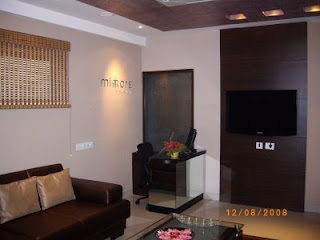 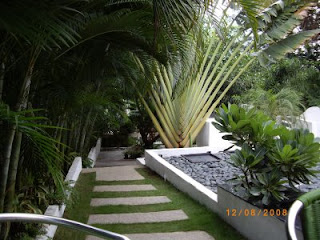 Well this is Mirrors and it is situated in Jubilee Hills near the check post in Hyderabad. It's a lovely SPA and saloon. If you need a haircut when you are in Hyderabad, do drop in. Just mention my name to Mr. Praveen who is my good friend and he will take care of you. I find the place out of this world in Hyderabad. I told my friend Praveen that I would blog his place and voila it is done, so please support me. Shree if you are in Hyderabad, do drop in and please mention my name and also recommend to your friends about Mirrors.
Posted by Sukku at 1:49 AM 2 comments:

Pictures from wet and gloomy Hyderabad 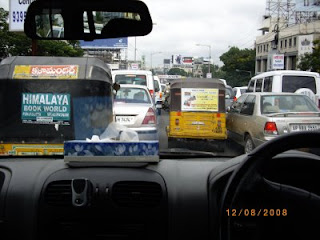 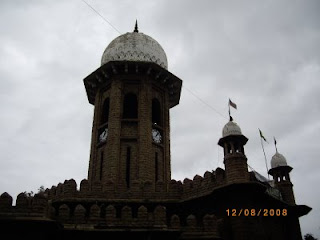 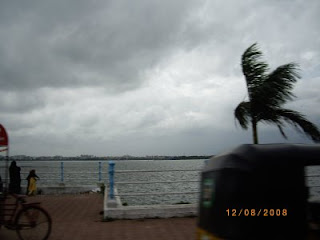 The pictures were taken this morning and afternoon. The first photo was in the morning where the traffic jam was horrible due to the damage inflicted by the rainy season. The second photo is the famous Mojamzahi market, built by the Nizam and in the background you can see the heavy skies. And the photo above was taken at Tank Bund, overcast and heavy breeze as though a cyclone is expected.

The weather man had said that more rain is expected in Hyderabad and yesterday I saw a picture in the newspaper whereby the residents were using boats to travel as most of the places in Hyderabad was flooded. My only worry is that I got to get clothes washed and if it rains, where the hell am I gonna dry them. I am leaving on this Friday back to KL and I am hoping for the weather to ease up as everything is damp and gloomy.

Due to the jam, I had my lunch at 3.30 p.m. at KFC and the KFC in India is quite unique, I had original Chicken with Rice pulau and Dal Makhani, so it was quite filling. Now lets see what am I going to have for dinner? Indian Chinese perhaps!
Posted by Sukku at 8:09 PM 4 comments:

Got stuck on the aircraft for 20 minutes as there weren't any docking bay for the aircraft at the Hyderabad International Airport. My suitcase was marked X with a chalk as I had left my digital camera in it and not in my laptop bag. I had to explain to the customs that I only have a digital camera and nothing else and furthermore it was not a new camera. He asked me the cost of the camera and I had to lie to him by saying Rs 3,000 as the actual cost is Rs 13,000. Well I got away with that without opening my suitcase, anyway I brought the camera along as I wanted to take some snap shots for the blog.

Well, I travelled with my HR manager, a lady and we both took a cab and when we walked out of the airport, we nearly got ourself drenched. It was raining outside and what the girl at the car rental booth informed us was that it was raining in Hyderabad for a week.

The roads looked bad, like mini swimming pool everywhere and it took us more than an hour to get to Hotel Taj Deccan. After leaving my HR manager, I went to my bachelors pad in Sainikpuri another hour or so. I reached home at 3.20 a.m. and after that I went to bed by 4.00 a.m., thought I would wake up late as we have lined up some candidates for interview at 2.00 p.m., but I got up at 8.00 a.m. instead, had my breakfast of bread and a half boiled egg with coffee. I brought the bread from home and my neighbour stocked the butter for me in the fridge.

Now I am waiting for my ex-driver, Thank God, he is still jobless after I terminated him last month on the 8th and paid him a good full month's salary. Little mercies in this gloomy weather as Shree mentioned it.

Hopefully my ride to the city would be ok as I know the jam is created by stalled cars due to the water ponding all over the road. And these drivers are like crazy to drive in to the water with their tiny Maruti and Tata Indica, even I had seen some auto's stuck.

I guess it's gonna be one helluva of week for me as I plan to fly back home on the 15th of August.
Posted by Sukku at 12:13 PM No comments:

Yes I am flying in to Hyderabad tomorrow midnight. I am going to be there for a week and it's gonna be a busy week ahead for me. Hope the weather is ok as I hate the rains in Hyderabad, with traffic jams everywhere and the dreaded powercuts.

I can relish on my mutton briyani and tandoori chicken. Sad thing though, I will be missing out on the opening ceremony of the Olympic games.

Hope to blog from Hyderabad and maybe take some snap shots.
Posted by Sukku at 6:34 PM 4 comments: 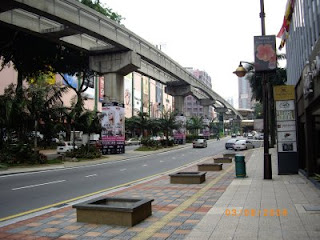 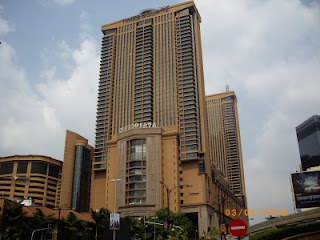 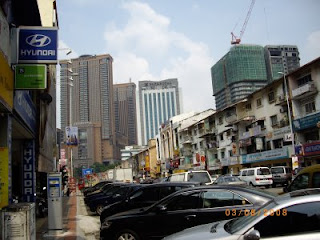 These snap shots were taken at Jalan Bukit Bintang/Jalan Imbi and our guest from Mumbai was staying at Hotel Park Royal. My office is located at Jalan Imbi and while I was going out for breakfast with him, I had the opportunity to take these shots.
Posted by Sukku at 7:01 AM No comments:

Life on the fast lane

Well it has been almost more than 3 weeks that I am in Malaysia and I just don't know how the time flies. I would be leaving for India on 08.08.08 for a week as I have to file an appeal at the City Civil Court.

I have sent my resumes to a few companies and also to meet a few directors for job openings but the way I look at it, I guess I have to act fast and I know the current situation is not so rosy in my company.

Last weekend I was busy with my lawyer from Mumbai and I also manage to get myself a new laptop by Sony as I am planning to give my HP to my son who is leaving for Moscow in the 2nd week of September for his medical studies.

Getting back to my work situation, it looks rather gloomy and half the time I am fire fighting with sub-contractors, purchasers, and suppliers on what owe them. So how can I perform under these circumstances.

Tried to relax last night and I was watching Sex in the City on DVD and would you believe it....I dozed off.Now that is bad as I was dead tired when I got home, guess I will continue on where I left off last night.

Well for the first time I am looking forward to my trip to Hyderabad as I know it would be a change of pace for me, away from all the maddening rush and problems. The sad news would be, when I return to Kuala Lumpur, the same problems would be there to great me.

Hope I can find time to blog in Hyderabad in the peace of my house which I am still maintaining.
Posted by Sukku at 8:45 AM 2 comments: