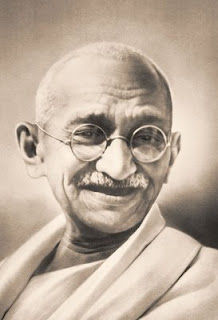 Gandhi became the symbol of the Indian struggle for independence in the first half of the twentieth century. Apart from the Indian nationalists who rallied under his leadership, he inspired writers, political figures, and filmmakers. One of the most famous works inspired by Gandhi was the 1982 Richard Attenborough movie in which Ben Kingsley starred as Gandhi. If you have watched the movie you will definitely remember a Gandhi quote or two. Here are some more inspiring quotations by the great man. Each Gandhi quote in this collection abounds in practical wisdom. You can read more about him by following this link below:

http://en.wikiquote.org/wiki/Mahatma_Gandhi
Posted by Sukku at 8:53 AM