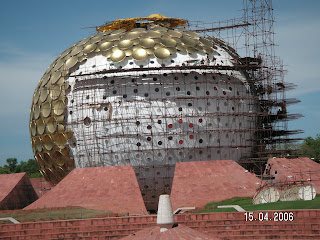 Take a guess? What in heaven's is that structure! (Sri Aurobindo ashram's latest addition). History says that Pondicherry originated as a French trade centre in 1674, when it was purchased from a local ruler. Now a seaside tourist resort, Pondicherry(close to Chennai) contains the Hindu ashram (religious retreat) of Sri Aurobindo, now an international study centre, and several colleges affiliated with the University of Madras. This shot was taken in 2006 and the meditation centre was under construction, I guess by now it should have been completed. I had my lunch at the ashram, run by a white lady at the canteen, (maybe a devotee) it wasn't expensive, I guess I had chicken roast with the organically grown salads(in the ashram). It was an experience for me, and the town itself was more of a french colony with buildings which looks like it was taken right out a page in history.
This is a nice place to visit and relax your mind as it has that magic in the air.